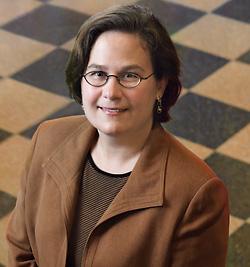 Catherine Sharkey is one of the nation's leading scholars on punitive damages and federal preemption in the realm of products liability. She has published more than twenty-five law review articles, essays, reviews, and book chapters in the fields of tort, administrative law, mass torts, class actions, and empirical legal studies.
In April, 2011, Professor Sharkey was named a Guggenheim Fellow by the John Simon Guggenheim Memorial Foundation for her forthcoming project on Judicially Managed Federalism. She has been appointed editor-in-chief of the Sedona Working Group on Punitive Damages and Mass Litigation. She served as an academic consultant to ACUS, the Administrative Conference of the United States, and the recommendations in her report concerning internal procedures governing preemptive rulemaking by federal agencies were adopted by ACUS. She is also an adviser for the American Law Institute's Restatement Third of Torts: Liability for Economic Loss, and was chair of the AALS Torts and Compensation Systems Section.

Professor Sharkey earned a bachelor's degree in economics, summa cum laude, from Yale University. A Rhodes Scholar, she received a master of science in economics for development, with distinction, from Oxford University (Magdalen College), and her J.D. from Yale Law School, where she was Executive Editor of the Yale Law Journal. She clerked for Judge Guido Calabresi of the U.S. Court of Appeals for the Second Circuit and Justice David Souter of the U.S. Supreme Court. She then worked as a Supreme Court and appellate litigation associate at Mayer Brown before joining the faculty of Columbia Law School. She became a Professor of Law at NYU in 2007 and was a recipient of the Podell Distinguished Teaching Award at NYU in 2010.