What Does It Mean When an LSAT is “Nondisclosed”? 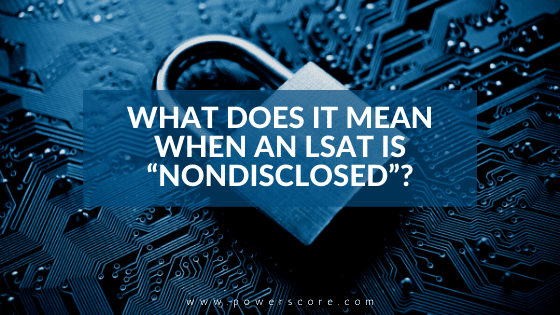 If you’ve ever taken an LSAT or looked through the LSAC website, you probably familiar with the notice LSAC places on every LSAT registration page. It’s easy to miss, and it really should be in big, bold red flashing letters–taking a nondisclosed LSAT is actually a pretty big deal. But why?

What is a Disclosed Test?

Let’s first start by explaining to what the terms disclosed and nondisclosed apply. They don’t actually apply to the specific topics of the questions on the test, or to what you need to do for the test. They apply to what happens after the test; specifically, to what you get from the test.

When you take a disclosed LSAT, you get the following information along with your score, percentile, and score band:

What is a Nondisclosed Test?

When you take a nondisclosed LSAT, you get the following information along with your LSAT score, score band, and percentile:

That’s right, nothing. You don’t get a copy of the questions, your answer sheet, the correct answers, or the score conversion sheet. All you get is your score and percentile.

In addition to fully nondisclosed LSAT administrations where nobody receives the additional information about the test, certain test-takers won’t have this information released to them even after a publicly disclosed test. These test-takers include:

So what? you might ask. That’s not that big a deal. The thing I care about the most is my score, anyway, so if I don’t get a copy of the questions or answers, it doesn’t really matter.

This is why, in my mind, it makes a lot more sense to take a disclosed test, if you have the opportunity.

Which LSATs are Which?

Nondisclosed administrations include the following:

Information about disclosed and nondisclosed tests can be found on the LSAC website here. For a full list of upcoming LSAT Dates, Deadlines, and Details we update this post regularly with information including whether or not they are disclosing tests.